Ever heard of the term Mil-Spec? What is Mil-Spec? The term Mil-Spec is one that has long been linked with watches. Mil-Spec refers to the “military specification” or “military standard” that instruments or devices must meet in order to be supplied to the armed forces. Hamilton Watch Company for example, was a supplier of timepieces and instruments to the US … More →

Hamilton’s Ventura created history when it was “born” in 1957 and became the world’s first electric watch. The Ventura watch found even more fame after its starring role in the 1961 Hollywood movie Blue Hawaii on the wrist of Rock and Roll legend Elvis Presley who played Chad Gates. The Ventura had a characteristic shield-shaped case and it is now … More → 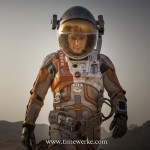 More than seventy years ago, on Sunday, 30 October 1938, the eve of Halloween, at around eight at night, America was “attacked by Martians” and the entire siege was broadcast “live” on prime time radio by the Columbia Broadcasting System. Note: Columbia Broadcasting System is now known as CBS, the television and radio broadcast network that is the principal asset … More →

http://timewerke.com/public/videos/hamiltonkhaki_001.mp4 If you are still unsure as to how Hamilton’s Khaki Takeoff Auto Chrono Limited Edition works, try viewing their promotional video (above). In Hamilton’s video, one can see that all it takes is one twist of the Khaki Takeoff Auto Chrono to detach the movement module (containing the Calibre H-31) from its wristwatch housing. One twist is also what … More →

With its “Bullhead look” what with its two chronograph pushers set at the one and eleven o’clock positions, yellow accents for the first 15 minutes on the bi-directional inner rotating flange controlled by the bezel and the aeroplane-shaped yellow pointer on the chronograph seconds hand, Hamilton’s Khaki Takeoff Auto Chrono is by itself, already a handsome-looking piece. But the amazing … More →

Among the interesting highlights at this year’s annual BaselWorld watch fair for Hamilton fans will be the Pan Europ. Hamilton’s 2014 Pan Europ is a sure-winner for those who like vintage timepieces or those who enjoy collecting the brand’s historically-inspired watches. The 2014 Pan Europ is inspired by the original of 1971 which housed the Calibre 11 automatic movement. The … More →