For many today, Singapore’s island of Sentosa, a name that means “peace and tranquillity” when translated from Malay, is synonymous with gambling, fun and relaxation what with its key attractions like Universal Studios Singapore and Resorts World Sentosa, which is one of two casinos found in Singapore.

Sentosa is also where visitors can enjoy a relaxing stay in the holiday resorts, among which are the Capella Singapore hotel which was the venue for the summit between President Donald Trump and North Korean leader Kim Jong Un that was held on 12 June 2018 and Amara Sanctuary Resort Sentosa.

However, it wasn’t all that fun and relaxing, especially in the 1930s and during the Second World War.

Sentosa was formerly known as Pulau Blakang Mati which means “the island behind death” when translated from Malay to English. The island was renamed Sentosa in 1970.

Pulau Blakang Mati was once a military base for the British Royal Artillery in the defence of Singapore. In the 1880s, the British constructed the Mount Imbiah Battery on the island, together with three forts, Fort Serapong, Fort Connaught and Fort Siloso. “Battery” in military jargon refers to an artillery unit.

On 8 December 1941, at around 4am, 17 bombers from the Imperial Japanese Navy Air Service that had taken off from Japanese–occupied Saigon in Vietnam bombed Singapore’s Tengah and Seletar airfields. Saigon is today known as Ho Chi Minh City, the largest city in Vietnam.

Singapore then was ill-prepared for any air strikes and there were few air raid shelters. The government of Singapore believed that it was better for the population to stay in their homes as then Governor Sir Shenton Thomas “… considered that shelters and evacuation camps were impracticable as the risk of enemy bomber getting through Singapore’s anti-aircraft defences and defending fighter planes was low”, according to the article “First air raid on Singapore” written by Alvin Chua and published on Singapore Infopedia.

Sir Shenton Thomas was the last Governor and Commander-in-Chief of the Straits Settlements and High Commissioner of the Federated Malay States. He was in office from 1934 to 1946.

In the article, it adds that: “… Singapore had about forty 3.7-inch heavy anti-aircraft guns capable of hitting targets above 20,000 feet (6,096m) but these proved ineffectual in deterring the Japanese bombers on 8 December and in subsequent air raids”.

Over 10 minutes, Chinatown, Raffles Place and Keppel Harbour were bombed, resulting in 133 injured and 61 fatalities.

There are only two known pre-war air raid shelters left on Sentosa. Both are on the grounds of Amara Sanctuary Resort Sentosa. Photo: © TANG Portfolio / TimeWerke

Over at Pulau Blakang Mati, British army family members such as Helen Hall, were most likely rushed into the air raid shelters that were dug and built just outside her residential block. The air raid shelters had an iron framework and were fortified with concrete. Steps were made leading down to the shelters which are fitted with seats.

Helen Hall’s father was a British Army officer and her family was residing in the building known as the “Married Soldiers’ Quarters”.

According to the article “Sentosa revisited” written by Crispina Robert and published in a local Singapore daily, The New Paper, on 8 February 1997, Helen Hall, who had returned to Singapore as a tourist when she was 63 years old, recalled being able to see the Japanese planes from her bedroom window and running into the air raid shelter. The only item she would grab was her teddy bear.

That would mean Helen Hall was born in 1934 and would have been 7 years old in 1941 when Singapore was first bombed. She recalled being in the air raid shelter in darkness as air raids were ongoing in the Singapore harbour.

The first bombs dropped on Pualu Blakang Mati on 18 January 1942, according to the article Fort Siloso History: 1942 – 1945 found on fortsiloso.com.

Today, the last two known air raid shelters to exist on Sentosa island are found within the grounds of the Amara Sanctuary Resort Sentosa.

At one time, the air raid shelters, though preserved, served as the storage area for housekeeping.

However, these two air raid shelters have since been opened up and are now part of the Amara Heritage Trail. The trail can be experienced either self-guided or guided. The morning guided trail which lasts for around an hour will be open to the public on 8 September 2018 and is available only on Saturdays and Sundays.

Our first guided preview visit was led by Carol Dragon in the morning of 31 August 2018. As we wanted more, we revisited the air raid shelter again in the afternoon at around 2.08pm, as recorded by our Longines Avigation Watch Type A-7 1935.

Longines Avigator Type A-7 1935. This is a modern remake of such watches meant for pilots and navigators during the 1930s. Photo: © TANG Portfolio/TimeWerke.

We chose to wear this watch as it is a remake of a military watch made in the 1930s. The Longines Avigation Watch Type A-7 1935 is a pilot’s watch featuring the mono-pusher chronograph and back then, such timepieces were supplied to navigators of the US Air Corps for astronomic navigaton or “course determination through the stars”. Its dial is tilted to offer higher legibility for the pilots.

The aim of the Amara Heritage Trail is to allow visitors to discover the nature and history within the resort. It includes Second World War-related sites like the air raid shelters and former military buildings that have been restored and refurbished. 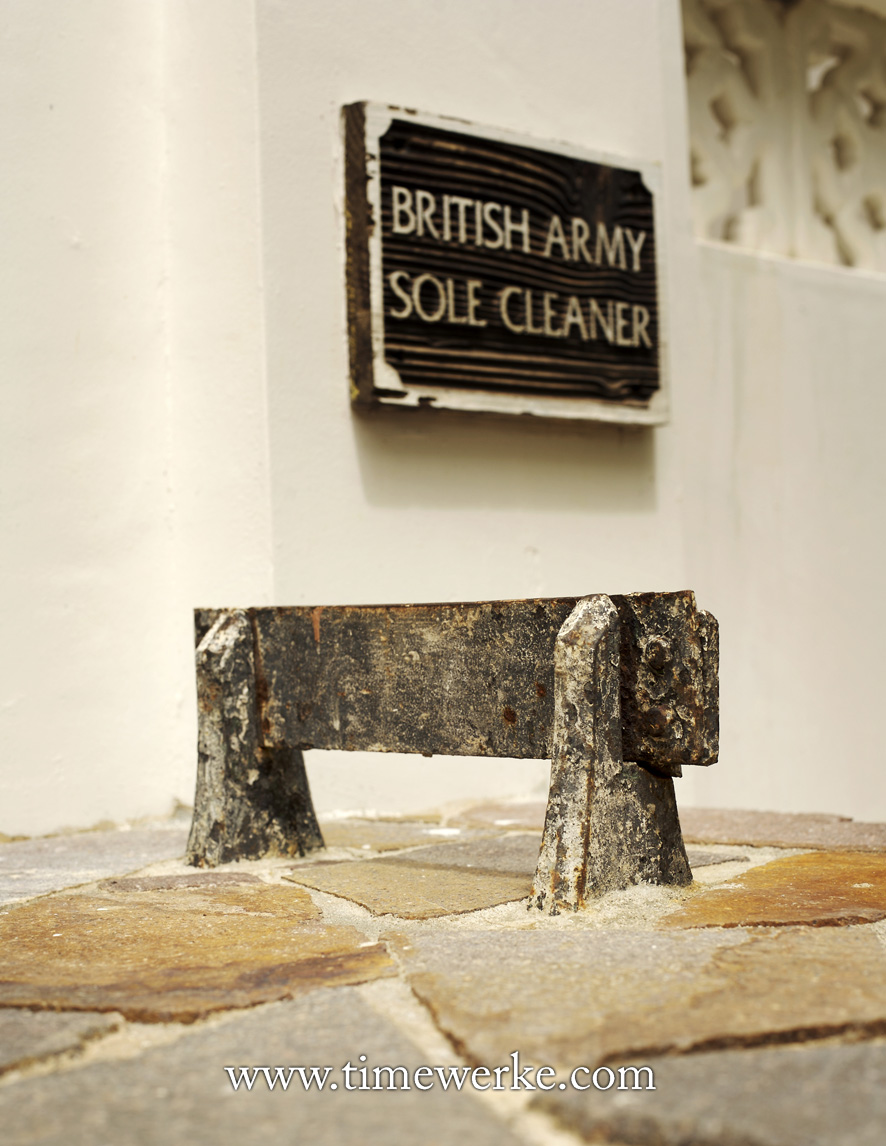 Amara Heritage Trail visitors and those staying at the resort will also be able to see another British military “tool” of the past – the boot scraper or “sole cleaner” used by the soldiers to clear the mud off their boots before they entered their quarters.