In the 2013 computer-animated movie Turbo, garden snail Theo gets into a freak accident and is transformed into a super-fast gastropod that is able to compete in the Indianapolis race and win.

Who would have thought up such a plot? Well, Turbo director David Soren did, hence Theo’s quote: “No dream is too big and no dreamer is too small.”

The result: the very radical two-movements-in-one watch allowing for one to display home time and the other, a second time zone.

The “bonnet” covering the Twin Turbo engine block can be flipped open to wind the barrels via the crowns which look like fuel caps. The Azimuth Twin Turbo is also available with bonnets in yellow, anthracite and silver, each limited to 88 pieces and priced at CHF6,000. Photo: © Azimuth Watch Co.

Azimuth co-owner and founder Chris Long who is also a motorhead, had been toying around with the idea of a driver’s watch using these vintage movements. That was how the design idea for the Twin Turbo emerged.

The body of the Twin Turbo is inspired by the dynamic and sleek silhouettes of 1960s racing cars. What’s more, there is a functional “bonnet” covering the engine block that can be flipped open to allow one to “refill” or power-up the movements via the crowns.

The designs of the two separate dials are inspired by vintage dashboard speedometers. Even the leather strap is ribbed, drawing its inspiration from sports car seats.

In other words, Azimuth’s Twin Turbo is in a sense, a “souped up” watch. 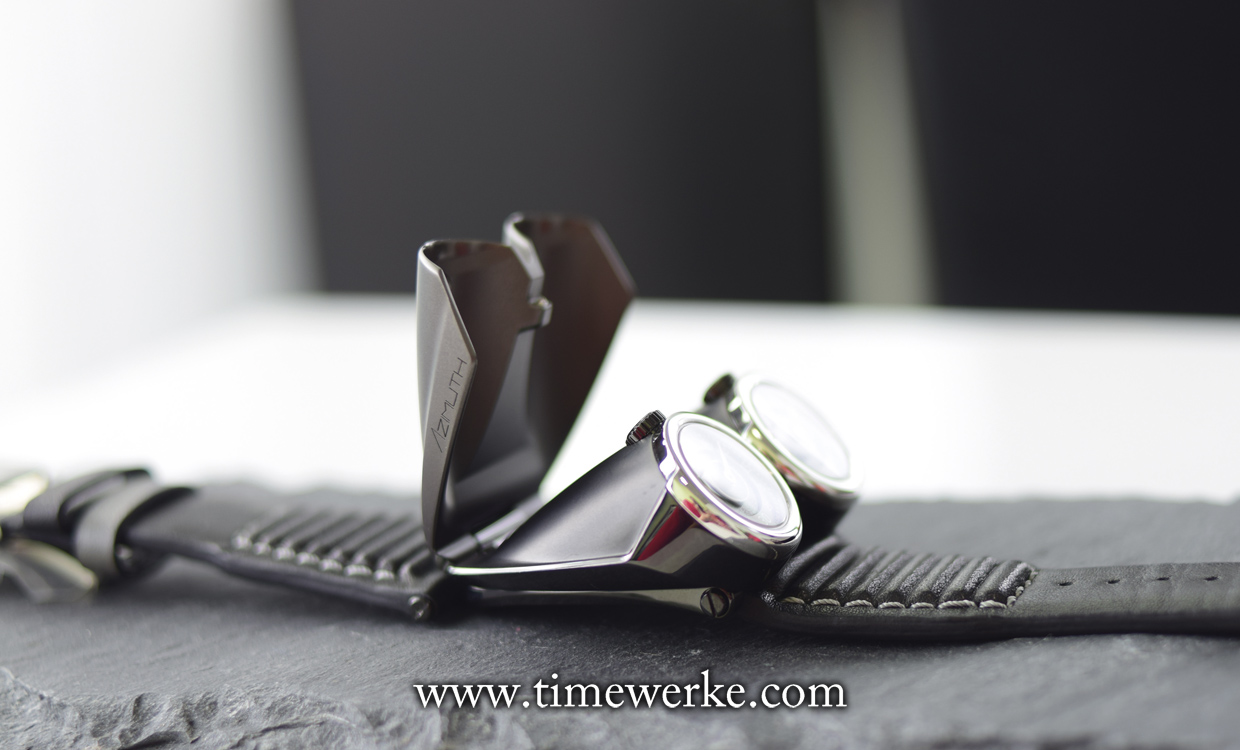 The two time displays are inclined at an angle. This is a driver’s watch as it allows the driver to conveniently read off the time while driving. Photo: © Azimuth Watch Co.

For that, we take our hats off to Azimuth’s innovative and creative spirit. Or rather, it should be “bonnets off”.